Unusually, I recently took two tripods away on a shoot, the Miller Arrow and the Miller DS20, I used them both every day for a total of 6 weeks on several episodes of a series called Extreme Homes.  Since the tripods took an absolute beating in terms of use and travel, I thought I'd write up a review.

So first of all, why two tripods? 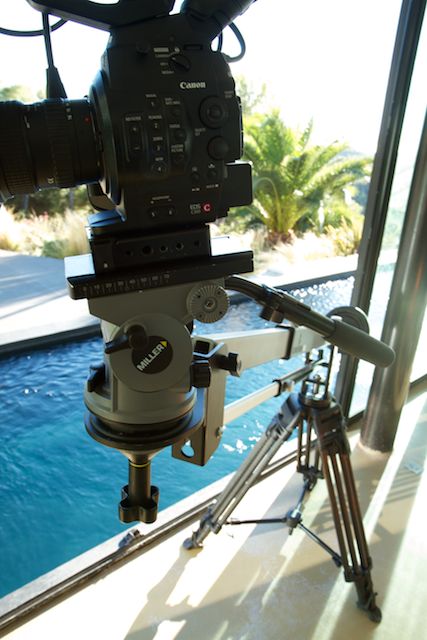 I knew the series was going to involve heavy grip equipment, jib shots were essential, as were tracking shots with a dolly , and I also wanted to take a slider in case there wasn't enough time to set up track.  For this kind of weight I needed the sturdy legs of the Miller Arrow.

The jib alone weighed 10kg, by the time the C300 camera and 15kg extra of weights were added to balance the camera, the total load would have been around 30kg.  In addition to this we were filming "extreme" houses  these were often on unusual landscapes, and in one case on the side of a mountain in the Alps. Setting a jib up on sloping ground to get beautiful smooth shots, I needed legs that were absolutely rock solid, yet still light enough to carry around with a small crew of just three.  The Miller Arrow legs were great, they are lightweight carbon fiber and the lock offs are strong enough to hold the weight of the jib.

The head of the arrow is really smooth and has several resistance settings.  This was really good for the jib and dolly work, as I often wanted the tension of the head to match the light resistance felt through tracking or moving the jib.

The 2nd tripod I took was the Miller DS20

I took the DS20 as a 2nd tripod as I needed a tripod for the Assistant Producer to use with a my Canon 7d as a 2nd camera.  The tripod is light enough that it works well with a DSLR.  I also used the DS20 with the larger Canon C300 when I need to walk around getting GVs and didn't want lots of heavy equipment.

1) It is incredibly lightweight with a small head and carbon legs.  It is great to just throw over your shoulder and walk around hunting for GVs.

2) The head is smooth for panning and tilting, unlike most lightweight tripods on the market

3) The head tilts up at an incredible angle meaning you can get up really close to something and shoot up almost vertically into the sky.  For an architecture programme this is great, as it allows you to get some really unusal angels, doing things like shooting directly up spiral staircases.

4) The legs work without a spreader and have three settings one of them is so wide that it lowers the tripod to the hight of a hi-hat or baby legs.  This is invaluble as it is like having a set of baby legs with you at all times, without having to carry around extra kit. 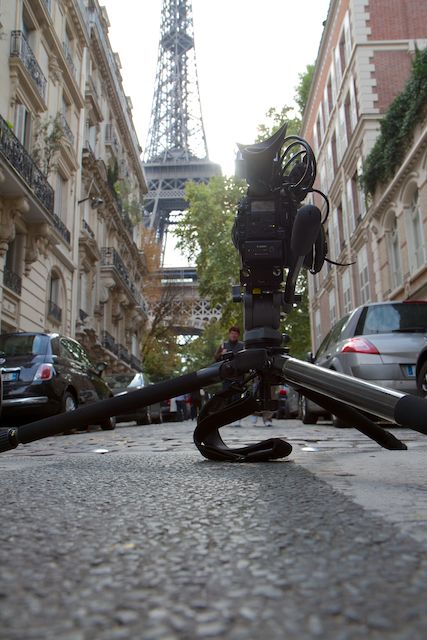 This shows why the Miller DS20 is so useful.  At normal height this shot of the Eiffel Tower was pretty boring, but getting down inches from the ground allowed me to get something more interesting.  With this shot set up, I just rolled for a while until the street was filled with the odd couple walking down the street with the Tower in the background and it ended up being a decent shot.

In this shot the building I was filming had three levels of glass floor.  This was an unusual feature, but tricky to film, with most tripod you would end up shooting down and filming the tripod legs.  With the DS20 I could shoot directly down, and even pan up to each floor with no problem.