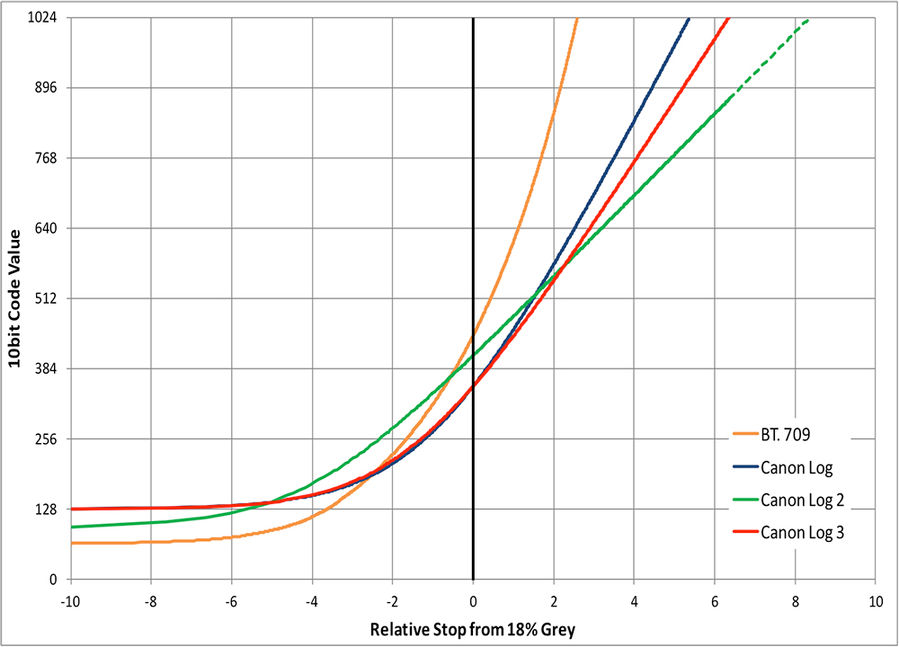 Shooting with a LOG curve is becoming more and more common as editors get more used to applying LUTS.  I often used to shoot with a picture profile that took very little grading for fast turn around shows, but these days almost everyone seems happy to receive LOG footage, but which LOG curve to choose?

If you are looking solely for high dynamic range, then LOG2 is the curve for you.  For high contrast bright outdoor scenes the LOG 2 curve works really well.  I always shoot the LOG2 Cine Gamut preset if using this LOG, as the Cine Gamut gives the greatest colour spectrum for grading.  Although it is tougher to grade from scratch, dropping the appropriate LUT on gets the editor most of the way there.

However, there are issues with LOG2, and I wouldn't recommend it for all shooting situations.

Before LOG 3 was available I shot a series of interviews against a dark grey background.  I noticed that these dark areas had a fair bit of noise in them once the LUT was applied.  This is something that Canon have rectified with the latest firmware upgrade and LOG2 is now less noisy in the shaddows.

I recently saw some of my LOG2 footage being graded in a soho facilities house by a top colourist. His comments were that:

1) His favourite footage to grade was always from the Ari Alexa.

3) He advised always exposing to the right, as it is a lot easier for him to bring down exposure, than to bump it up.

No suprises there I guess, however, I was still concerned about the grain/noise in the shaddows.

Incidentally, the footage was shot at native 800 ISO, so I wasn't expecting much noise at all. When I looked at the footage on my IMAC it looked pretty clean.  However, Imacs are consumer products aimed at making everthing look as nice as possible.  This is not true of 4k monitors in grading suits, these are correctly calibrated and can highlight any issues with noise.

I decided to do a few basic tests to see what happens with the noise on the different LOG curves.  I set a grey card up lit with an even light from a kino flo and put a white card and black next to it as a reference.  The camera was set to native 800 ISO and I tried out various exposures.

Grey was placed at 39 % for LOG2 and 32.5 % for LOG 3 (Incidentally exposure did not need to be altered in order to achieve this shift in values)

The LOG footage itself looked pretty clean on all LOG curves, but applying a LUT caused a bit of grain in the shaddows.  I had expected this, as the LUT is essentially bringing up the levels by a couple of stops.

With the LUT applied and at 2 stops and more under exposed, there was some noise when using the LOG2 curve, but the LOG 3 curve looked less noisy.

For many situations I would prefer to trade the extra stop of dynamic rage gained by using LOG2 for the cleaner shaddow areas that LOG3 provides.