What is the best zoom lens for Canon and DSLR video

So many of us now shoot on Super 35mm sensor cameras whether that is a DSLR or a Canon C300 C500, Sony F5 or F55 whichever camera you work with you are likely to need a mid range zoom, so which is the best one out there?

Much as I'd like to shoot with prime lenses all of the time, it just isn't practicle for what I do, for most of the programmes I work on I need a zoom.

Whether you are shooting on a super 35 sensor camera such as the Canon C300, Sony F3, F5 etc or a DSLR, at some point you are likely to need a decent mid range zoom.  In an ideal world I would like something that is around 20 - 80 mm, that is rugged and well built, that has a good image quality (decent contrast, little distortion etc) that is as fast as possible (somewhere around 2.8) which is the same aperture throughout the range, that ideally has manual aperture and has a common size barrel, so I can easily screw on a protective uv filter.   This sounds like a lot of demands, but having a good mid range zoom means that you will use it alot, maybe as much as 80 percent of your shooting time on a documentary, and therefore it must be as decent quality as possible.

There are several lenses which provide all of requirements above, but they are mostly very expensive.  Here is a brief run down of them, with aproximate costs.  (These cost are a guide only, as prices tend to vary when you are spending this kind of money on a lens) 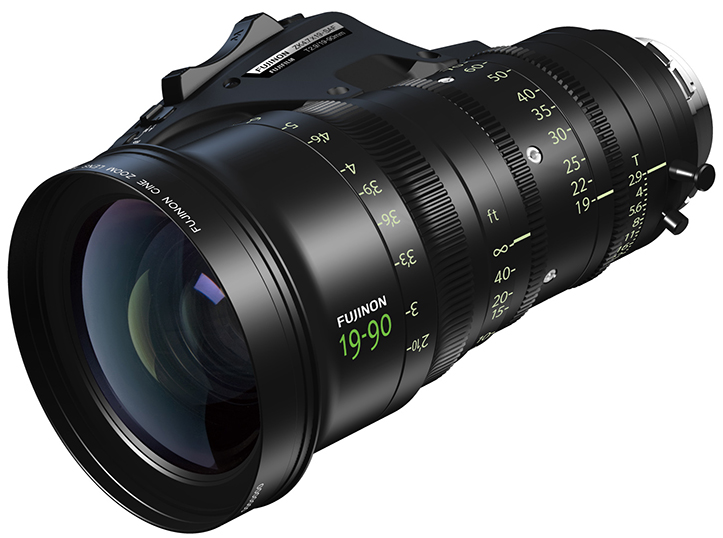 At the top end Angeieux, Canon and Fujnon are all making great lenses around the 30k mark, for my budget this is too high, especially to go on my Canon C300, which itself only cost 12k.  I have used the Fujinon Cabrio and the Angenieux optimo and thought they were great to work with in terms of ease.  At the lower end of the scale here the Alura and Red Zoom could well be worth a look.  The Red zoom weighs over 4kg though, so it may be a touch on the heavy side for most small cameras.  Most of these lenses are PL mount, but would easily work on an EOS mount with an adapter. 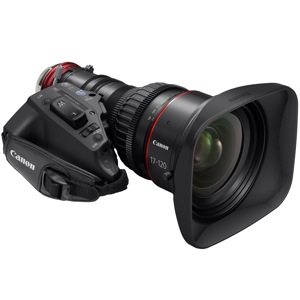 Update:  New to the market, showing at  NAB 2014 is the Canon Cine Servo CN7x17 KAS S 17-120mm.  With this lens Canon seem to have but there years of making ENG style servo zooms to good use and created the Cine Zervo, an ENG lens that works for a Super 35 size sensor.  This means anyone shooting on a C300/500 Arri Amira, Sony F5 F55 can attach this lens for a more tradtional on the shoulder ENG shoot.  The lens can be used for PL or EF mount cameras, and interestingly the lens information (zoom, iris, auto iris etc ) is transmitted to either types of camera.  The EF camera bodies receive lens support through the lens contact point and the PL cameras through the 12 pin cable.  EF cameras would need to use a dtap to 12 pin if power is needed for the servo.  The advantages of this lens are pretty obvious, the range is much bigger than most cine zooms.  For applications when you absolutely must have a zoom, run and gun, observational documentaries etc, this lens would be a real winner.  I could see if working really well on the F5 F 55, but I am not sure about the C300, c500, it looks it would probably need some lens support especially on the EF body.  As yet prices have not been announced, but Abel Cine have a price of 31k. 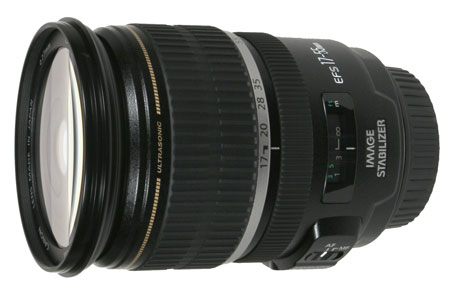 The next option, and a much cheaper one, is too look at stills lenses.  Stills lenses are obviously not designed for video and therefore have lots of flaws: iris are often not constant through the range, there is often no manual control for the iris, the focus throw can be very small, the general build quality is no where near as solid as the zooms above. The focus often doesn't have hard stops so spins round indefinitely, making repeat focus marks dificult.

Many of these issues are not there when it comes to older stills lenses.  As a general rule, these tend to be built with more solid metal housings, they have larger focus throws as many of them are purely designed for manual focus, they have manual aperture rings (which can be declicked to give you a smooth iris control).  The focus ring usually has a hard stop, meaning it doesn't spin around indefinitely and therefore lose any focus marks you may have.

Before going out and buying an old stills lens and modifying it for video use, it is worth noting that some of these lenses have been produced over several decades.  An earlier version of a lens might be built in a certain country with certain materials, but both of these things might change over time, which can cause a shift in the quality of the lens. An early version of a lens that might be great for cine modification and a later version of the same model might not be as good, or may not even work at all on modern cameras.   Another issue with older lenses is that they tend to be less fast and have less zoom range than their modern equivalents.  So using a stills lens is going to be about compromise.

Below is a list comparing a range of modern and old vintage zoom stills lenses. 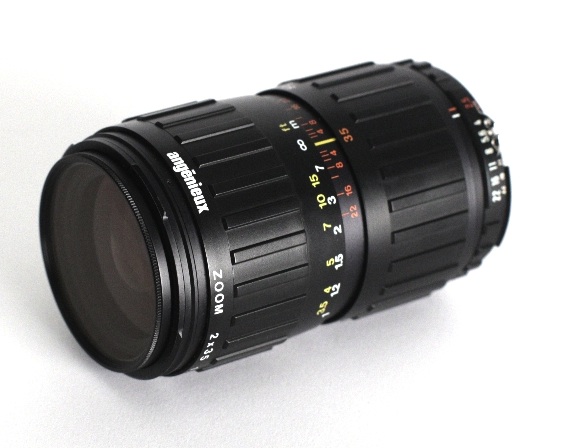 There are obviously plenty of other vintage lenses that could be used here, but I have only listed lenses that come fairly close to reaching my requirements above.  Many old lenses are simply too slow to be considered in my opinion.  If you are going to the trouble of shooting on a large frame camera, you are obviously looking for a decent shallow depth of field, and if you can only open up your lens to 5.6f, it sort of defeats the point.

The Canon L series 24-70, is an absolute work horse for any jobing photographer so there are huge numbers of these lenses about.  They are obviously sharp and have decent optics.  The only issue with these is they are not image stabilized as some modern lenses are, and the focus throw is very small (as on most modern lenses).   The Canon EFS 17-55 has these same issues, and it feels slightly cheap and plasticy, that said I have been using one for 3 years in all conditions and mine is still working well.   If your main requirement is range, then the Canon L series 24-105 has to be looked at.  It is image stabilized, which is useful for video, and as with a L series lenses from Canon it is rugged and weather sealed.  The only issue I have with this lens is the speed 4f.  It just doesn't feel that exciting to me when I use it.  The Leica R 35-70 is also only 4f, but there is something a bit more interesting about the look a feel of this older lens.  I was using the Canon 24-105 only a few days ago, yes it did a good job, but I just can't bring myself to buy one. 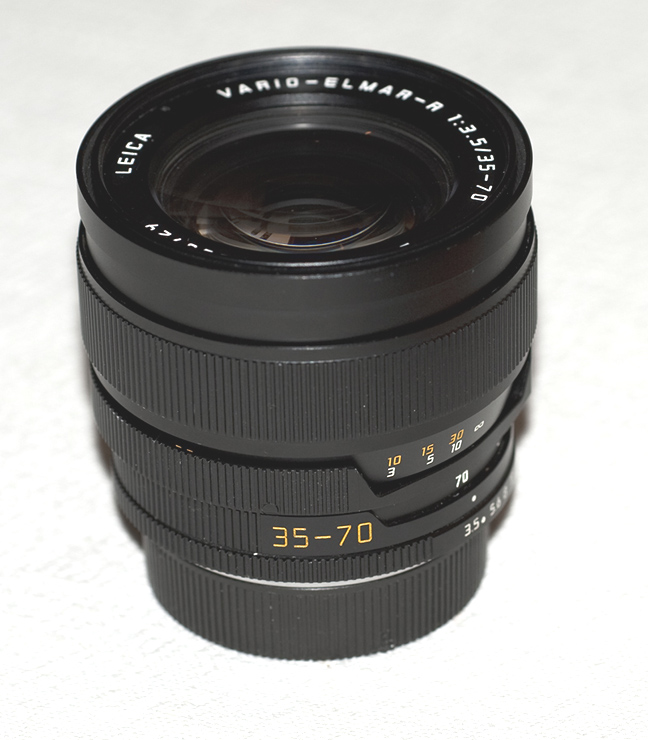 Leica R lenses are well respected by many photographers and even some cinamatographers.  These things are built to last and feel solid - all metal housings unlike today's lenses.  The focus throw is much larger, making pulling focus easier.  These lenses can be de-clicked to give you a smooth iris change.  There are also several brands making adapters out there (leitax is usually recommended).  the same can be said for Angenieux who produce great lenses for film and digital video.  There 28-70 feels pretty solid, but I have heard that it is not a good idea to use it in the rain (unlike Canon's 28-70, which seems capable of taking a battering).  One thing to look out for with Angenieux and Tokina is that they made lenses with a variety of cameras in mind.  The versions designed for Nikon cameras will obviously focus in the same direction as Nikon lenses.  This is a pretty big issue for me, as I am so used to rotating  in a certain direction to find focus and I would prefer to always use lenses that focus in the traditional way.

As you can see, whatever you choose (unless you have 30k to spend on an Angenieux optimo) there is always going to be a compromise.  You can have fast 2.8 lenses that have a decent range, or you can opt for a slower lens that has iris control and possibly a more interesting look.  The slightly softer creamier look of a Leica could be a bit more apealing that the Canon glass that everyone else is using, however, you won't have the small depth of field of the modern lens and you won't have the range.  The best thing here is to decide which factors are most important to you and most useful for the work you do.  The one factor that makes the decision easier is that lenses hold their value incredibly well.  You can always buy somthing, use it on a few jobs, and if you feel it isn't what you want, put it back on ebay and you'll probably get what you paid for it.

For more lens information, check out my equipment page.