I recently thought it would be a good idea to start writing the odd article about inspiration for cameramen.  I often think about what makes the difference between cameramen - from a basic operator, up to a top cinematographer.   I was watching Hitchcock's Strangers on a Train the other day and a couple of shots stood out to me as having an amazing emotional effect.  In case you haven't seen it, or can't remember the plot fully, here is a basic outline of what happens:  Two strangers meet on a train, and one of them brings up the idea of  "the perfect murder."  This man, Bruno, suggests that they swap problems, so that Bruno would kill Guy's wife (who he is trying to divorce), and Guy would return the favour by killing Bruno's father.  As neither would have a motive, it would be impossible for police to solve.  Bruno seems friendly enough, and Guy dismisses the conversation, thinking it is just idol chat from an unusual stranger.   However, Bruno immediately murders Guy's wife and follows Guy around trying to get him to complete his side of the "bargain" and kill Bruno's father.

Bruno is a total psychopath, but he is always smiling and has a false friendliness to his character, so it is left to the camera work and music to convey a sense of menace. Hitchcock's cinematographer Robert Burks pulls this off brilliantly.  The first shot is filmed from Guy's perspective, when he discovers that Bruno is watching him from a far. 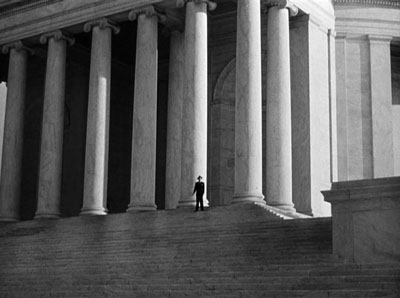 In this shot Guy is pulling up in a car, he looks out of the window to see the menacing figure of Bruno looking down at him from the steps of the Jefferson Memorial.    Bruno is so small is screen you can't even see his face, but you know it is him.

It is hard to say why this shot works so well, it just does.  There is the contrast between Bruno's dark suit and the bright pillar behind, the fact that Bruno doesn't move but his gaze is trained on Guy, but most of all it is the imposing nature of the building itself, the giant pillars and the raised aspect that give the feeling that Bruno is a sinister character. 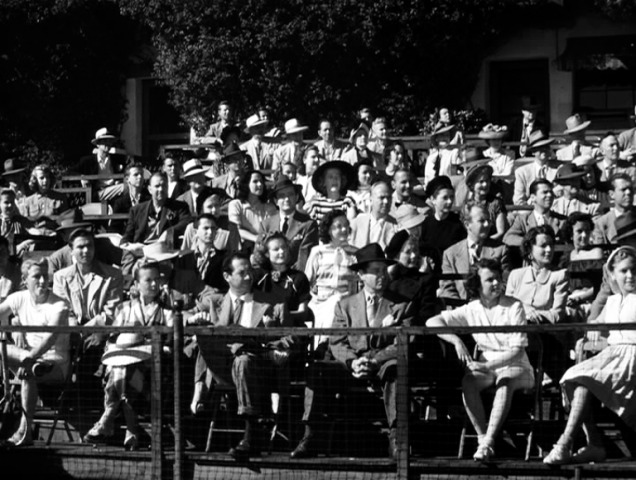 This next shot is even more dramatic than the previous one.  This time Guy is playing in a tennis tournament.  The camera starts on a wide shot of the audience, all of their heads are moving from side to side, following the ball, except one.  In the middle of the screen you can see one head that isn't moving, but  staring straight ahead, immobile. 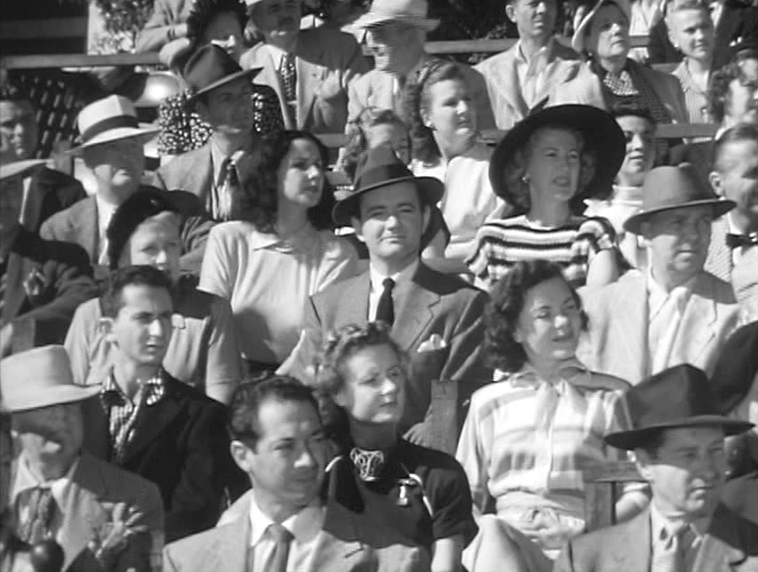 The camera gradually pushes in to reveal Bruno who is sitting with an odd grin on his face, he has come to watch Guy, not the tennis match. 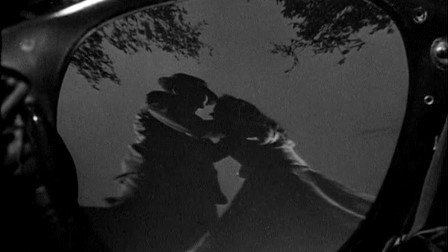 Of course there are plenty of other great shots in this film, notably when Bruno commits his murder we view it from a reflection in the murdered woman's glasses.  All of this didn't go unnoticed and the film was nominated for an Academy Award for best black and white cinematography.